The Third Class Woman was a passenger on the RMS Titanic Liverpool on April 10, 1912 and was in third class. She is not to be confused with the 3rd Class Irish Woman, who was played by Linda Kerns and had an Irish accent.

When the Titanic started sinking on April 15, the woman asked "Captain, where should I go, please". The captain, dazed and overwrought, did not answer her. She then walked away. The woman later died during the sinking with her baby in arms. Officer Lowe sees her with her baby floating in the water saying, "We waited too long".

She was most likely from France, since she spoke with a French accent and pronounced "Captain" as "Capitan". She was portrayed by Kathleen S. Dunn 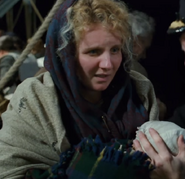 The women pleading for help.
Add a photo to this gallery

Retrieved from "https://jamescameronstitanic.fandom.com/wiki/Third_Class_Woman?oldid=23342"
Community content is available under CC-BY-SA unless otherwise noted.