Sven Gundersen was a Swedish poker player who was the relation of Olaf Gunderson. He lived in Southampton, England. He and Olaf planned on boarding the RMS Titanic, with the third class tickets that himself and Olaf had managed to buy; they still had some substantial money though, enough to wager at poker.

On the day of the trip, the pair found themselves in a heavy stakes poker game Jack Dawson and Fabrizio De Rossi. Sven had bet their tickets as well as a pocket knife, some money and a pocket watch as a way of making their opponents go all in with everything they had, something Olaf was against. Despite Sven having two pairs, Jack beat him with a full house, resulting in them losing their tickets aboard the ship.

As Jack collected their winnings, Sven watched supportingly as Olaf grabbed the American and prepared to strike only to instead strike Sven himself, knocking him out, due to the man having lost them tickets that cost them a fortune.

Jack whooped it up that he and Fabrizio were going to the United States. However, his revelry was sobered by the bartender of the tavern where the poker game occurred, who bluntly stated "No, mate. Titanic is going to America, in five minutes!" motioning to a clock. Fabrizio and Jack quickly collected their winnings, stuffing as much money as they could in their pockets, then bolted out of the tavern onto the loading dock, where a seaman immediately boarded them as they presented their tickets. They were escorted to a third-class cabin sharing it with two other Swedes, one of whom asked the other "Where is Sven?" in his own language.

The loss proved fortunate for Sven and Olaf after all as it likely saved their lives.

Behind the scenes[edit | edit source]

After close examination of the boarding pass prop used in the film, it's shown that both Sven and Olaf's last name is Gundersen, indicating that they are somehow related.

He was portrayed by Dan Pettersson. 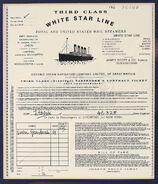 Sven's ticket for the RMS Titanic.
Add a photo to this gallery

Retrieved from "https://jamescameronstitanic.fandom.com/wiki/Sven_Gunderson?oldid=22459"
Community content is available under CC-BY-SA unless otherwise noted.