Margaret Tobin Brown, also known as "The Unsinkable Molly Brown" (although she was never known as "Molly" in her lifetime as she was actually called "Maggie") was an American socialite, philanthropist and activist who became famous as one of the survivors of the sinking of the Titanic. In the film, she is portrayed by Kathy Bates.

According to historical facts, Margaret "Molly" Tobin Brown was born in Hannibal, Missouri on July 18, 1867. Brown was married with a son and a daughter. She and her family moved to Denver, Colorado in 1894. Between the 1880s and 1912, her husband had found some gold in the west and they became very wealthy. She boarded the RMS Titanic from Cherbourg as a first class passenger. Despite being wealthy, several women in first class despised her, especially Rose's snooty mother Ruth DeWitt Bukater. Ruth saw Molly as she was "new-money", which meant that she had earned her wealth instead of inheriting it therefore was not of an upper-class breeding from birth, and tried to avoid her company. However, Molly did not let this bother her at all and even made a point of sticking to them like glue to annoy them with her difference in decorum.

She assisted Jack Dawson in winning over Rose DeWitt Bukater by lending him her son's tuxedo. She was one of the few people from the upper class that refused to discriminate against the lower class. Rose DeWitt Bukater was one of the other few kind-hearted upper class passengers. At dinner, she regaled everyone with a funny tale involving her husband accidentally lighting a fire in the stove while both "drunk as a pig" and unaware that Molly had concealed money inside it. Only the stiff and uptight Ruth DeWitt Bukater and Caledon Hockley refused to laugh at it. She also supported Jack when he made clear his view on life, calling it "well-said".

When the Titanic sank, Molly escaped in Lifeboat No. 6 and was one of the 705 survivors of the Titanic's shipwreck. She clashes with Quartermaster Robert Hichens in the lifeboat; Molly believed that, because there was plenty of room in the boat, they should pick up survivors in the water, but Hichens believed they would swamp the boat. She almost wins in her argument, until Hichens threatens to toss her overboard, and she was left to do nothing but watch in horror as Titanic slid beneath the waves. In reality, just the opposite exchange occurred, and the boat did go back for survivors, of which none were found.

Molly, Ruth DeWitt Bukater, Quartermaster Hichens, and all the occupants of Lifeboat 6 were picked up by the RMS Carpathia early on the morning of April 15, 1912. The film does not state what happened to Molly Brown after the events of the sinking, so her fate is left unknown; since she survived the sinking, Molly doesn't appear at the end with everyone else when Rose and Jack are reunited in the Grand Staircase, but Rose still fondly remembers her. However, in history, Brown died due to brain tumor in 1932. These historical facts were not stated in the film. 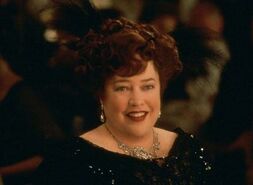 Molly watches in horror as the Titanic sinks
Community content is available under CC-BY-SA unless otherwise noted.
Advertisement