Bates was born in Memphis, Tennessee to Bertye Kathleen (née Talbot), a homemaker, and Langdon Doyle Bates, a mechanical engineer. Her great-great-grandfather was an immigrant from Ireland to New Orleans and served as President Andrew Jackson's doctor. She has two older sisters, Mary and Patricia. Bates graduated from White Station High School in Memphis. She attended Southern Methodist University, majoring in theatre and was a member of Alpha Delta Pi sorority, and graduated in 1969. She moved to New York City in 1970 in order to pursue an acting career.

In 1991, Bates married actor Tony Campisi, with whom she had lived for 12 years previously. They divorced in 1997.

Bates is the Executive Committee Chair of the Actors Branch of the Academy of Motion Picture Arts and Sciences Board of Governors.

She is also a survivor of ovarian cancer, after winning the battle in September of 2003. Nine years later, in 2012, Bates announced on Twitter that she was diagnosed with breast cancer. She later underwent a double mastectomy.

Her nickname is Bobo. She was often mistaken for comedian Roseanne Barr, who in turn spoofed Bates' role in Misery in a Saturday Night Live sketch. 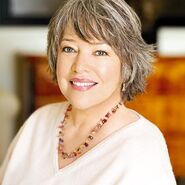 Add a photo to this gallery
Retrieved from "https://jamescameronstitanic.fandom.com/wiki/Kathy_Bates?oldid=19621"
Community content is available under CC-BY-SA unless otherwise noted.