The Heart of the Ocean was a rather large, heavy diamond and as Rose DeWitt Bukater said an overwhelming necklace that disappeared on the Titanic. It is based off the real Hope Diamond.

By 1912, Nathan Hockley had purchased it for his son Caledon to give to his fiancee Rose DeWitt Bukater as an engagment present that Cal originally planned to give to Rose at their rehearsal gala. However, in order to ensure her meeting with him, he gave it to her after she nearly jumped off the stern of the Titanic; claiming it was symbol of his love for her, and that he could give her anything she desired. He also did it to coax Rose into having sex with him.

Later, Rose shows the diamond necklace to Jack and asks him to draw her naked while wearing it. Rose changed into her kimono robe and play-gived Jack a small payment. She then removed her kimono robe, and Jack sketched her nude pose with the necklace on the sofa. When it became clear Rose loved Jack, Cal managed to get it into Jack's pocket, getting him arrested. Cal then put the necklace in his coat pocket, but forgot it when he gave the coat to Rose.

Rose then finds the necklace in the pocket after getting off the Carpathia. She keeps it for years, until Brock Lovett tried looking for it, only to find the nude portrait of Rose. Rose and her granddaughter, Lizzy, then go to Lovett, where Rose tells her story to them.

Rose then throws the necklace off the Keldysh, just above the Titanic. By throwing the necklace into the Atlantic ocean, Rose finally lets go, because she is ready to make peace with Jack and the other Titanic victims; she is finally ready to move on.

The Search for the Heart of the Ocean[edit | edit source]

In 1996, Brock Lovett, a famed treasure hunter went in search of the Heart of the Ocean necklace. He discovered Caledon's (Cal's) safe, upon searching for the shipwreck of the Titanic. All that was in the safe was a nude portrait of a woman (Rose) wearing it. When he was interviewed about it, Rose contacted Lovett and told him that she was the woman in the portrait and that she knew about the necklace. When Rose met Lovett; along with her granddaughter, Lizzy, who accompanied her; she told him and his crew her story of the Titanic, although the story did not help him at all whatsoever in finding the necklace. That night, Rose went to drop the necklace into the ocean. Rose had in the past considered selling it, but each time refused to allow herself to live off Cal's money, since the diamond was technically his. Brock attempted to stop her, although the only result was him being able to hold it. Rose quickly dropped it into the sea to allow it to reclaim its heart as well as to show how worthless she believed it to be.

This $20 million necklace was worn by Gloria Stuart to the 1998 Academy Awards Less expensive reproductions have also been available since the release of the film. Nouveau Treasures makes reproductions consisting of 1½" or 1" heart-cut blue cubic zirconia. Price Range $249-299. 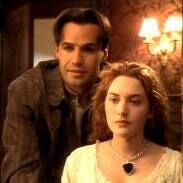 The Heart of the Ocean in the elderly Rose's hand
Add a photo to this gallery
Retrieved from "https://jamescameronstitanic.fandom.com/wiki/Heart_of_the_Ocean?oldid=23399"
Community content is available under CC-BY-SA unless otherwise noted.