Fabrizio De Rossi was a supporting character in the film, Titanic. He was Jack Dawson's best friend and trustworthy companion. He is an Italian native. It is not known when they met, but it is possible Fabrizio accompanied Jack on his journeys around the world, including the ill-fated maiden voyage of the Titanic. He was portrayed by Danny Nucci.

Fabrizio was born in Italy. It is unknown where or how he and Jack met, but he presumably travelled the world with Jack and greatly desired travelling to America.

Jack and Fabrizio were first seen playing poker with Olaf and Sven. With less then 5 minutes until Titanic's launch, Jack had won his hand in poker along with a pocket knife, money, and two tickets for steerage. The two of them were the last people to board, falsely claiming they had completed the health and sanitation inspections and that they were Americans. Subsequently, the sixth officer of the Titanic believed their lie snd allowed them aboard.

When they entered their bunk, Jack greeted their bunkmates, two other men, who go on to ask each other where Sven was in Swedish. They later meet Thomas Ryan (Tommy), an Irishman, and Helga Dahl, a native Norwegian whom Fabrizio fell in love with. After settling in, Jack and Fabrizio go topside where they look over the bow shouting about their good fortune with Fabrizo jokingly saying he can see the Statue of Liberty already. They also briefly watched Dolphins swim beneath them.

In a deleted scene, Fabrizio begged Helga to come with him to America, but Helga's father, Olaf Dahl, refused and they are separated. He was later seen partying at the Third Class party with Helga, Tommy, Jack and Rose.

During the sinking of Titanic, after Jack and Rose escaped the flooded lower decks, they found Tommy and Fabrizio behind a locked gate intended to prevent the steerage passengers escaping to the boat deck and manned from the other side by crew personnel. Seeing that escape from the main stairwell was hopeless, the group tried a different route but were again thwarted by a smaller locked gate manned by crew. Under Jack's instruction, Fabrizio, Jack, Tommy and another man tore a nearby bench from the floor while Rose cleared the way and, after a few rams, they succeeded in breaking down the gate. The surrounding passengers escaped and Tommy punched the crew member who had refused to unlock the gate, knocking him out.

Once on deck, Fabrizio, Jack, Rose and Tommy attempt to find a lifeboat for all four of them to ensure their survival. Initially unsuccessful, Jack and Rose split from Tommy and Fabrizio to widen the search. Tommy and Fabrizio found a lifeboat with empty spaces and begged to be admitted but William Murdoch, in charge of filling the boat, wouldn't allow them as he had interpreted the captain's orders as "Women and Children only", as opposed to "Women and Children First". In the ensuing ruckus, Tommy was pushed forward by another man and accidentally shot by Murdoch. He died quickly. Fabrizio furiously curses Murdoch in italian.

With the water advancing towards him up the deck, Fabrizio took Tommy's lifebelt before being forced into the water. He attempted to board Collapsible Boat A to save his own life, which also contained Caledon Hockley. The boat was trapped, but Fabrizio managed to free it by severing its ropes with a penknife. Sadly, he failed to board and is dragged away by a current.

As he attempted to swim to another lifeboat beneath Funnel No. 1, the funnel has tilted to such an angle that its support cables could no longer cope with the stress and they snapped one by one. Fabrizio turned around just in time to see the funnel falling towards him and, before he could swim away, he was crushed.

He reappears in Rose's Titanic heaven sequence holding Helga's hand and smiling at Rose. He was seen clapping when Jack and Rose kiss.

In the original script, Fabrizio wasn't killed by the falling smokestack, managing to avoid it at the last second. After the ship sank, he tried to board a lifeboat, but Cal beat him in the head with an oar, cutting open his scalp, and sarcastically tells him to swim to his destination. Fabrizio later dies from his injuries.

Fabrizio, moments before being crushed by a smokestack.

Fabrizio dancing with Helga at the Party

Fabrizio trying to cut the ropes of a lifeboat.

Fabrizio during the sinking 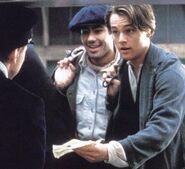 Fabrizio and Jack about to enter the ship.

Fabrizio saying farewell to Helga in a deleted scene. 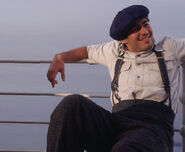 Fabrizio at the promenade deck.

Fabrizio moments before getting killed. 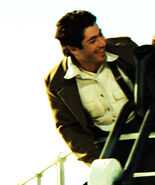 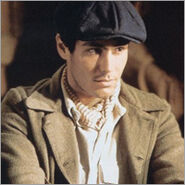 Fabrizio introduces himself to Tommy Ryan
Community content is available under CC-BY-SA unless otherwise noted.
Advertisement