Eric Braeden (born Hans Jörg Gudegast; April 3, 1941) is a German-American film and television actor, best known for his role as Victor Newman on the soap opera The Young and the Restless, as Hans Dietrich in the 1960s TV series The Rat Patrol, and as John Jacob Astor IV in James Cameron's 1997 film Titanic. Braeden won a Daytime Emmy Award in 1998 for Lead Actor in a Drama Series for the role of Victor Newman.

Braeden was born Hans Jörg Gudegast in Bredenbek, Germany (near Kiel), where his father was once mayor. He immigrated to the USA in 1959. In the United States, Braeden attended The University of Montana in Missoula.

Braeden is regarded as a very good tennis player. He and his wife, Dale Gudegast, were witnesses at the wedding of Bob Crane and Sigrid Valdis while on the set of Hogan's Heroes. Their son, Christian Gudegast, is a screenwriter who co-wrote the film A Man Apart, which starred Vin Diesel and was nominated for a Teen Choice Award in 2003. 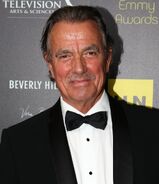 Retrieved from "https://jamescameronstitanic.fandom.com/wiki/Eric_Braeden?oldid=19565"
Community content is available under CC-BY-SA unless otherwise noted.