Edward John Smith was an English naval officer who served as commanding officer of numerous White Star Line vessels. He is best known as the captain of the RMS Titanic, mostly likely because he perished when the ship sank in 1912.

Edward John Smith was born on 27 January 1850 on Well Street, Hanley, Staffordshire, England to Edward Smith, a potter, and Catherine Hancock, born Marsh, who married on 2 August 1841 in Shelton, Staffordshire. His parents later owned a shop.

Smith attended the Etruria British School until the age of 13 when he went to Liverpool to begin a seafaring career. He began his apprenticeship on the Senator Weber owned by A Gibson & Co., Liverpool.

Life on the RMS Titanic

During the voyage, Smith had been given several ice warnings from other ships in the Atlantic. He didn't know that the ship was heading for a collision course with an iceberg. When Titanic hit the berg, the impact woke him up and he rushed to the bridge only to find out that his ship had been badly damaged and that she would sink.

This struck him hard. Smith became indecisive most of the time.

When the water was coming onto the boat deck, Smith stood by and watched Officer Lightoller trying to launch collapsible boat B. A third class passenger with her baby tried to ask Smith where "should I go"; Smith remained silent and walked towards the bridge to await his fate. A crew member offered him a life-jacket but Smith brushed it aside.

Smith walked onto the bridge and entered the wheel house. gripping the wheel as water began to flood in. Eventually, the glass shattered and the water engulfed the wheelhouse, drowning Smith as he clung to the ship's wheel.

In Rose's "dream sequence", Smith was present in the background, along with Joseph Bruce Ismay.

Smith is played by Bernard Hill, in the film, Titanic.

The movie remains silent on whether Smith did yield to Joseph Bruce Ismay's pressure to bring the Titanic ahead of schedule. This is a historical controversy.

In the movie, Smith is shown being indecisive in most of the scenes; in realitly, Smith was quite active in overseeing the loading and launching of the boats; he actively seeked assistance and rescue throughout the sinking and later released crewmen from their duties when the ship was near its end.

In realitly, when the water reached the deck, Steward Edward Brown saw the captain approach with a megaphone in his hand. He heard him say "Well boys, do your best for the women and children, and look out for yourselves.” He saw the Captain walk onto the bridge alone just seconds before the ship took its final plunge. This was the last reliable sighting of Smith. Just seconds later Trimmer Samuel Hemming found the bridge apparently empty.

There are conflicting accounts of Smith's death. Some survivors said Smith entered the ship's wheelhouse on the bridge, and died there when it was engulfed. These accounts have remained the iconic image which has remained of Smith. if Smith did indeed go to the bridge around 2:10 a.m. as Steward Brown said, and took refuge inside the wheelhouse, that would explain why Trimmer Hemming did not see him when he went onto the bridge a few minutes later. Earlier, at nightfall, the shutters on the Titanic‘s wheelhouse windows would have been raised, to keep the lights of the wheelhouse from interfering with the bridge officers’ night vision: Trimmer Hemming would have been unable to see Captain Smith had the captain indeed been inside the wheelhouse, awaiting his end. 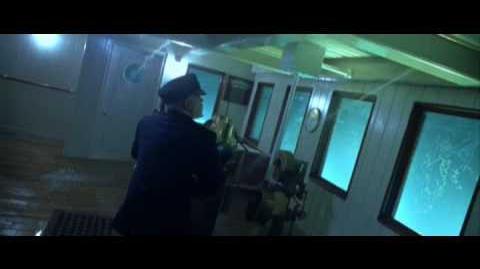 Titanic - Death of the Captain Smith 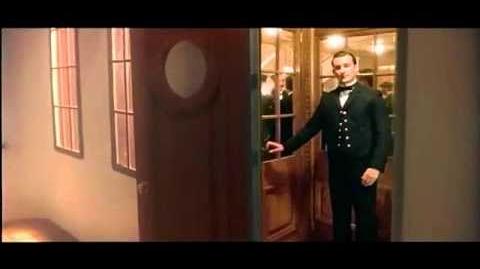 Ending Scene
Add a photo to this gallery

Retrieved from "https://jamescameronstitanic.fandom.com/wiki/Edward_John_Smith?oldid=20506"
Community content is available under CC-BY-SA unless otherwise noted.