Charlotte Chatton is an English actress. She is best known for playing as Emma in Dr. Quinn, Medicine Woman (1996), Genevieve L'Merchant in the Sci-Fi/Action/Horror (1996) film Hellraiser: Bloodline, Madeleine Astor in Titanic (1997), Peggy in Stand-ins (1997), and as Jen Cross in Dakota Road (1992).

According to her IMDb biography, Chatton has been working in recent years as a producer and scriptwriter, and in 2009, founded 'The Next Level Script,' a professional screen writing service. 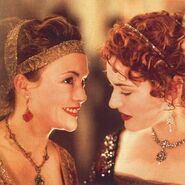 Charlotte Chatton with Kate Winslet on the set of Titanic.
Add a photo to this gallery
Retrieved from "https://jamescameronstitanic.fandom.com/wiki/Charlotte_Chatton?oldid=19617"
Community content is available under CC-BY-SA unless otherwise noted.