William "Bill" Paxton (May 17th, 1955 – February 25th, 2017) was an American actor and film director. He gained popularity after starring roles in the films Apollo 13, Twister, Aliens, True Lies, Thunderbirds, and Titanic. Paxton starred in the HBO series Big Love (2006–2011) and was nominated for an Emmy Award for the Miniseries Hatfields & McCoys.

Paxton was in the crowd waving when President John F. Kennedy emerged from the Hotel Texas in Ft. Worth, Texas, on the morning of his assassination, November 22nd, 1963. There are pictures at the Sixth Floor Museum in Dallas where 8-year-old Paxton can be seen astride his father's shoulders.

Bill Paxton moved to Los Angeles at 18, where he found work in the film industry as a set dresser for Roger Corman's New World Pictures.

He made his film début in the Corman film Crazy Mama (1975), directed by Jonathan Demme. Moving to New York, Paxton studied acting under Stella Adler at New York University.

After landing a small role in Stripes (1981), he found steady work in low-budget films and TV. He also directed, wrote and produced award-winning short films including Fish Heads (1980), which aired on Saturday Night Live (1975).

His first appearance in a James Cameron film was a small role in The Terminator (1984), followed by his very memorable performance as Pvt. Hudson in Aliens (1986) and as the nomadic vampire Severen in Kathryn Bigelow's Near Dark (1987). Bill also appeared in John Hughes' Weird Science (1985), as Wyatt's sadistic older brother Chet.

Although he continued to work steadily in film and TV, his big break did not come until his lead role in the critically acclaimed film-noir One False Move (1992). This quickly led to strong supporting roles as Wyatt Earp's naïve younger brother Morgan in Tombstone (1993) and as Fred Haise, one of the three astronauts, in Apollo 13 (1995), as well as in James Cameron's offering True Lie (1994).

Paxton has appeared in such films as Weird Science, Aliens, Apollo 13, Near Dark, Twister, Titanic, Thunderbirds and True Lies. Four years after appearing in Titanic, he joined James Cameron on an expedition to the actual Titanic. A film about this trip, Ghosts of the Abyss, was released in 2003.

Paxton has also directed a number of short films, including Fish Heads, which aired during Saturday Night Live's low-rated 1980-1981 season. He directed the feature filmsFrailty and The Greatest Game Ever Played.

Paxton was cast in a music video for the 1982 Pat Benatar song Shadows of the Night, in which he appeared as a Nazi radio officer. He appears in Limp Bizkit video Eat You Alive.

Frequently portrays characters who are dead by the end of their respective films. 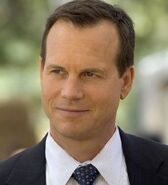 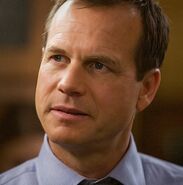 Retrieved from "https://jamescameronstitanic.fandom.com/wiki/Bill_Paxton?oldid=21039"
Community content is available under CC-BY-SA unless otherwise noted.