Bert Carmell was a third-class passenger aboard the RMS Titanic, the father of Cora Cartmell and the husband of Mrs. Cartmell.

He was present outside the ship with his daughter, discussing the ship size. They later waved goodbye to the spectators of the ship alongside Jack Dawson and Fabrizio De Rossi. He was present in the third class party, drinking beer while watching his daughter dance with Jack.

While the ship was sinking, he and his family were quickly woken up by crewmen, telling them to put their life vests on but were quickly left alone, unsure of what to do afterwards. He drowned alongside his family when the ship sank, as they became trapped in third class as the crew refused to open the gates. He was portrayed by Rocky Taylor.

Bert with his daughter. 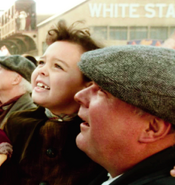 Bert and Cora before boarding Titanic
Add a photo to this gallery
Retrieved from "https://jamescameronstitanic.fandom.com/wiki/Bert_Cartmell?oldid=19569"
Community content is available under CC-BY-SA unless otherwise noted.